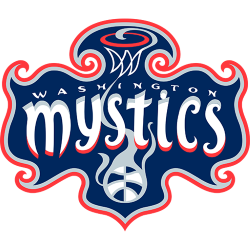 The Washington Mystics are a professional basketball team based in Washington, D.C., playing in the Eastern Conference in the Women's National Basketball Association (WNBA). The team was founded prior to the 1998 season, and is owned by Monumental Sports & Entertainment (led by Ted Leonsis), which also owns the Mystics' NBA counterpart, the Washington Wizards. Sheila C. Johnson, co-founder of BET and ex-wife of Charlotte Sting owner Robert L. Johnson, is the managing partner.

The Mystics have qualified for the WNBA Playoffs in 10 of its 20 seasons of existence, and the franchise has been home to such high-quality players as two-time WNBA MVP Elena Delle Donne, Tennessee standout Chamique Holdsclaw, athletic shooting guard Alana Beard, and nearby Maryland product Crystal Langhorne. Until 2018, the Mystics were the only current WNBA franchise that had never made it to the WNBA Finals. They lost in the semifinals twice, to New York in 2002 and to the eventual champion Minnesota Lynx in 2017.

The Entertainment and Sports Arena is a 118,000-square-foot multi-purpose events facility, located on the St. Elizabeths East Campus, in Congress Heights, a residential neighborhood in southeast Washington, D.C.

The arena was officially opened on September 22, 2018.