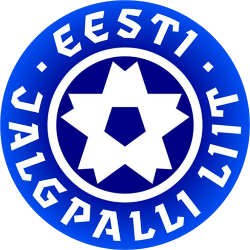 The Estonia national football team (Estonian: Eesti jalgpallikoondis) represents Estonia in international football matches and is controlled by the Estonian Football Association, the governing body for football in Estonia. Estonia's home ground is A. Le Coq Arena in Tallinn.

Estonia's first match was held against Finland in 1920, being a 6–0 defeat. The team participated in the 1924 Olympic Games tournament, their only participation. In 1940, Estonia was occupied by the Soviet Union and did not regain independence (and the possibility of a national football team) until 1991. Estonia's first FIFA recognised match as an independent nation after the break-up of the Soviet Union, was against Slovenia on 3 June 1992, a 1–1 draw in the Estonian capital city of Tallinn.

Estonia has never qualified for the FIFA World Cup or UEFA European Championship. The team has however reached the UEFA Euro 2012 qualifying play-offs, by finishing second in their qualifying group, before being drawn up against Ireland for a play-off tie, making 2011 the Annus mirabilis of Estonian football.

Estonia has also participated in the local sub-regional Baltic Cup championship, which takes place every two years between the countries of Estonia, Latvia and Lithuania. Estonia has won the Baltic Cup tournament three times—most recently in 1938—which is the least of all three Baltic states.

The A. Le Coq Arena (known as Lilleküla Stadium prior to sponsorship and during UEFA competitions) is a football stadium in Tallinn, Estonia. It is the home ground of football club Flora and the Estonia national football team. With a capacity of 14,405, it is the largest football stadium in Estonia.