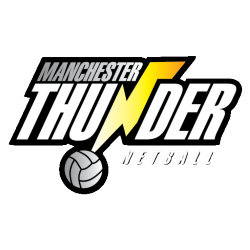 Thunder's Director of Netball and Head Coach is Karen Greig , who previously worked as assistant coach at Thunder under previous Head Coach Dan Ryan. Ryan was appointed in June 2015 after previous coach Tracey Neville was appointed manager of the England national netball team.

The club's home court is the Wright Robinson Sports College, which is known as The Thunderdome when hosting Manchester Thunder matches. The club won the annual Mike Greenwood Trophy three times in a row between 2012-2014, before losing to Team Bath in the 2015 edition. The college caters to pupils of all socio-economic and religious backgrounds and was previously a specialist college of Sport and the Arts. The school is on the edge of east Manchester, in the grounds of Debdale Park. Wright Robinson holds the Sportsmark Gold award with distinction, Artsmark Gold award also with distinction, the coveted FA Charter Mark, and the Healthy School award. Wright Robinson College is the single largest and most over-subscribed school in the city of Manchester, with around 1,800 pupils on roll.

The Headmaster of the college is Neville Beischer BEd (Hons), with Martin Haworth as the Deputy Headmaster and the Chair of Governors is Mr Colin Brierley MBE. The college, in terms of Value Added scores, is the highest achieving Comprehensive secondary school in England and Wales. This means that from a relatively low achieving background, children leave Wright Robinson with above average results. Results from Wright Robinson are higher than those of any school of its kind in the country, beaten in Manchester only by the King David School.

The annual presentational ceremony for GCSE results is held at the Bridgewater Hall, home of the Hallé Orchestra.