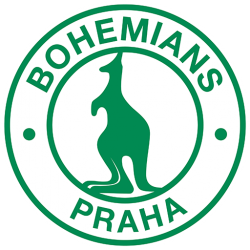 Bohemians Praha 1905 (previously named FC Bohemians Praha) is a Prague-based football club, which was founded in 1905 as AFK Vršovice. The club won the 1982–83 Czechoslovak First League, its only league championship. Its colours are green and white.

The best known player from Bohemians' history is Antonín Panenka, who is now the club chairman. Bohemians' mascot is a kangaroo, the legacy of a 1927 tour of Australia. Following the tour, the club was awarded two live kangaroos, which they donated to the Prague Zoo.

Ďolíček Stadium is a multi-purpose stadium in Prague district Vršovice, Czech Republic. It is currently used mostly for football matches and is the home ground of Bohemians 1905. The stadium was opened on 27 March 1932 for a match against SK Slavia Prague. The reconstruction of 2003 changed the capacity to 13,388 (3,028 seated). After reconstruction in summer 2007, its capacity was reduced to 9,000 (3,800 seated). Bohemians 1905 were not allowed to keep the stand sector, they changed it into seats, which reduced the capacity further, to 7,500 (all seated).