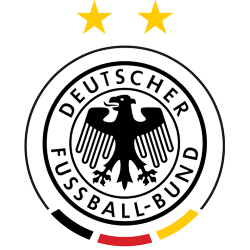 The German national team is one of the most successful in women's football. They are two-time world champions, having won the 2003 and 2007 tournaments. They are also the only nation to have won both the men's and women's tournament. The team has won eight of the twelve UEFA European Championships, claiming six consecutive titles between 1995 and 2013. Germany is one of the two nations to win both the men's and women's European tournament, along with the Netherlands. Germany has won Olympic gold in 2016, after three consecutive bronze medals at the Women's Olympic Football Tournament, finishing third in 2000, 2004 and 2008. Birgit Prinz holds the record for most appearances and is the team's all-time leading goalscorer. Prinz has also set international records; she has received the FIFA World Player of the Year award three times and is the joint second overall top goalscorer at the Women's World Cup.

Women's football was long met with skepticism in Germany, and official matches were banned by the DFB until 1970. However, the women's national team has grown in popularity since winning the World Cup in 2003, as it was chosen as Germany's Sports Team of the Year. As of June 2018, Germany is ranked 2nd in the FIFA Women's World Rankings.