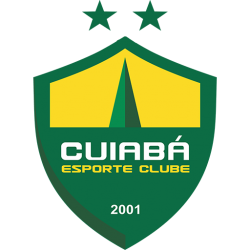 Cuiaba vs Atletico PR (29 May)

Cuiabá Esporte Clube, or Cuiabá, as they are usually called, is a Brazilian football team from Cuiabá in Mato Grosso, founded on December 12, 2001.

Arena Pantanal is a multi-use stadium in Cuiabá, Brazil. Completed on 26 April 2014, it is used mostly for football and hosted four group stage matches during the 2014 FIFA World Cup. During the World Cup, the arena had a capacity of 41,390, and currently can seat 44,003 spectators.

Prior to its use for the 2014 FIFA World Cup, the venue received much criticism. It suffered a fire in October 2013, due to polystyrene insulation panels catching alight. Although nobody was injured, the fire came within 24 hours of the state governor of Mato Grosso warning that it may not be finished for the World Cup. On the day of its opening, on 24 April 2014, 5,000 seats were still to be installed in the stadium. Next to the football stadium is the Ginásio Aecim Tocantins.