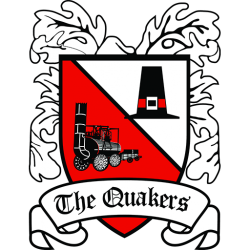 Darlington Football Club is an English football club based in Darlington, County Durham. They are members of the National League North, the sixth tier of English football, and play at Blackwell Meadows.

The club was founded in 1883, and played its matches at Feethams. The club originally played in regionally organised leagues, and were one of the founding members of the Northern League in 1889. They were first admitted to the Football League when the Third Division North was formed in 1921. They won the Third Division North title in 1925, and their 15th place in the Second Division in 1926 remains their highest ever league finish. After their admission to the League, they spent most of their history in the bottom tier. They won the Third Division North Cup in 1934, their first victory in nationally organised cup competition. They reached the last 16 of the FA Cup twice, and the quarter-final of the Football League Cup once, in 1968. In the early 1990s they won successive titles, in the Conference National in 1990 and the Fourth Division in 1991. In 2011 they won the FA Trophy, defeating Mansfield Town 1–0 at Wembley Stadium.

Darlington moved to the all-seater, 25,000-capacity Darlington Arena in 2003. The cost of the stadium was a major factor in driving the club into administration in 2012. Because the club was unable to agree a Creditors Voluntary Agreement (CVA) it was expelled from the Football Association (FA). A new club was immediately formed but the FA ruled that, as a new club, it must have a different playing name from the expelled club. The name chosen was Darlington 1883, and that club was placed in the Northern League Division One, the ninth tier of English football, for the 2012–13 season. They won three promotions in four seasons before the FA approved their request to change to the traditional Darlington FC name.

The club's main rival historically has been Hartlepool United.

In December 2013, it was confirmed that a deal had been reached in principle for the football team to share Darlington RFC's ground at Blackwell Meadows ground, and thus return to the town of Darlington. In March 2016, it was confirmed that Darlington aimed to relocate by the start of the 2016–17 season, with expansion plans in place to increase the capacity to 3,000, as required for promotion to the National League. In the event, they played their first match at Blackwell Meadows on 26 December 2016, a 3–2 National League North win against F.C. Halifax Town in front of 3,000 spectators. Darlington expanded the seated stand at Blackwell Meadows to seat 588 in 2018, after a successful funding drive by their fans, allowing for the club to be promoted to the Conference National. This was built following the 2016-17 season, where Darlington finished the season in the playoff, but were disqualified from playing due to the inadequate number of seats at Blackwell Meadows. The club continues to explore further ways to improve Blackwell Meadows, including a stand at the currently empty west end of the ground.