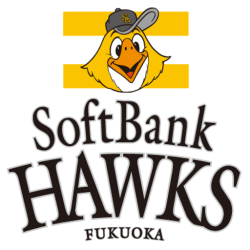 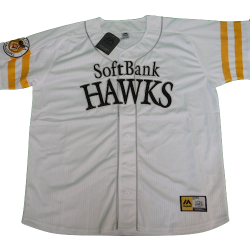 The Fukuoka SoftBank Hawks are a Japanese baseball team based in Fukuoka, Fukuoka Prefecture. The team was bought on January 28, 2005 by the SoftBank Corporation.
The team was formerly known as the Nankai Hawks and was based in Osaka. In 1988, Daiei bought the team from Osaka's Nankai Electric Railway Co., and its headquarters were moved to Fukuoka (which had been without NPB baseball since the Lions departed in 1979). The Fukuoka Daiei Hawks won the Pacific League championship in 1999, 2000 and 2003 and won the Japan Series in 1999 and 2003, and as the Fukuoka SoftBank Hawks won the Japan Series in 2011, 2014, 2015, 2017, 2018, and 2019.
The franchise's original name was Nankai when it joined the Japanese Baseball League (JBL) in 1938, with the name originating with the Nankai Electric Railway Co., which owned the team at the time. The PayPay Dome is a baseball field, located in Chūō-ku, Fukuoka, Japan. Built in 1993, the stadium was originally named Fukuoka Dome and has the capacity of 38,585 seats. With a diameter of 216 meters, the Fukuoka Yahuoku! Dome is the world's largest geodesic dome. This is Japan's first stadium built with a retractable roof. In 2005, Yahoo! JAPAN, one of SoftBank's subsidiaries, acquired the stadium's naming rights, and thus renamed it Fukuoka Yahoo! Japan Dome or abbreviated as Yahoo Dome In January 2013, it was renamed to Fukuoka Yafuoku! Dome Yafuoku means Yahoo! Auctions in Japan. in October 30, 2019 was announced that the stadium was going to be named PayPay Dome in reference to payment system owned by Softbank.