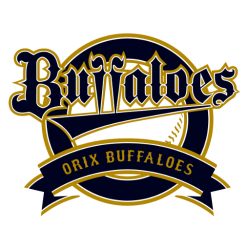 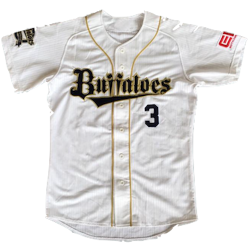 The Orix Buffaloes are a Nippon Professional Baseball team formed as a result of the 2004 Nippon Professional Baseball realignment by the merger of the Orix BlueWave of Kobe, Hyōgo Prefecture, Japan, and the Kintetsu Buffaloes of Osaka, Osaka Prefecture, Japan. The team plays in the Pacific League and is under ownership by the Orix Group, a leading diversified financial services company based in Tokyo.
The combined team began to play in 2005. The Buffaloes split home games between Kobe Sports Park Baseball Stadium, the former home of the BlueWave, and the Osaka Dome, which was the home of the original Buffaloes franchise. The Kyocera Dome Osaka (京セラドーム大阪) is a baseball stadium located in Osaka, Japan. Opened in 1997, the stadium was the home field of the Kintetsu Buffaloes. In 2005, the stadium became one of the homes of the Orix Buffaloes, a result of the merger between the Orix BlueWave and Kintetsu Buffaloes. Prior to the Osaka Dome opening, the Buffaloes played their home games at Fujiidera Stadium. The Hanshin Tigers also use the stadium as their "home field" for their season openers and their home games in August because their stadium, Koshien Stadium, is used for high school baseball tournaments during those periods.
The Dome hosted the Pride Total Elimination 2005 and Pride Total Elimination Absolute mixed martial arts fights.