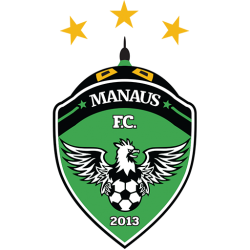 Manaus Futebol Clube, or simply Manaus, is a Brazilian football club based in Manaus, Amazonas state.

The club emerged as a project of the city councilman of Manaus, Luís Mitoso, after he left the board of Nacional for private matters. Mitoso retired from Nacional in March 2013, when he was vice president of the club, after four years leading the club as president, in the company of Giovane Alves.

In 2018, Manaus once again won the main division of the Campeonato Amazonense by defeating Fast Clube in the final. They also played Série D later that year. They were knocked out in the quarter-finals by Imperatriz-MA on penalties, denying them a spot in Série C for 2019.

In 2019, Manaus won for the third time straight the Campeonato Amazonense, against Fast again. In Série D, Manaus easily qualified to the knockout phase as the best team in overall standings. They gained promotion to 2020's Série C after defeating Caxias 3–0 on the second leg of the quarter-finals after losing 1-0 in Caxias' home.