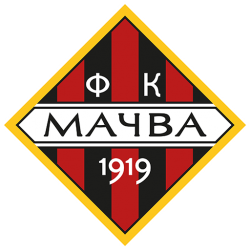 Fudbalski klub Mačva Šabac (Serbian Cyrillic: Фудбалски клуб Мачва Шабац, lit. 'Mačva Šabac Football Club') is a football club from Šabac, Serbia. One of the oldest football clubs in Serbia, their nickname is Provincijski Urugvaj (The Provincial Uruguay). The nickname was used for the first time in 1927, when the Uruguay national football team were one of the best teams in the world, and due to local people and media comparing Mačva's style to that of the Uruguayan team, the main daily newspaper Politika consistently used the nickname Provincijski Urugvaj.

In the period of Yugoslavia, Mačva mostly played in the lower tiers of the football system but did spend two seasons in national top flight of Yugoslavia, it was in seasons 1951 and 1952 Yugoslav First League. Afterwards, they would spend the next six decades in the Yugoslav lower-leagues but were a stable and respected lower tier club in the country.