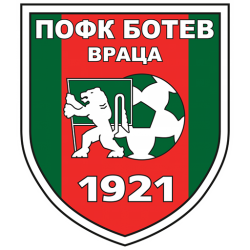 Botev (Bulgarian: Ботев) is a Bulgarian professional municipal association football club based in Vratsa, that competes in the First League, the top tier of Bulgarian football. The club was founded in 1921.

Botev Vratsa is one of the most prominent football clubs in Bulgaria, playing its home matches at Hristo Botev Stadium. The team's home stadium was built in 1948. It is situated in the Hristo Botev sport complex, in the east part of Vratsa. The stadium originally had 25 000 seats. After a recent reconstruction, which took place in the first half of 2008 and in 2009, the stadium has 7 reconstructed seated sectors with a total of 6 417 seats.

Stadion Hristo Botev (Bulgarian: Стадион „Христо Ботев“, English: 'Hristo Botev Stadium') is a multi-purpose stadium in Vratsa, Bulgaria. It is currently used mostly for football matches. It has been the home of Botev Vratsa for 60 years. The stadium was built in 1948 and has a seating capacity of 6,417 spectators. After the approval of a project worth € 150 000, in 2008 the stadium was renovated and had 2,255 seats, spread in the 3 central sectors. In June 2009, the Botev Vratsa management approved a second project, worth € 120 000 for reconstruction of sector "V", opposite the central building of the stadium. The second renovation was completed in 2009.