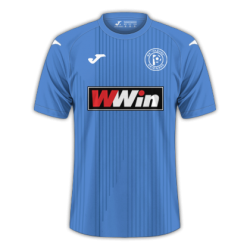 Fudbalski klub Radnik Bijeljina (Serbian Cyrillic: Фудбалски клуб Радник Бијељина) is a professional association football club based in the city of Bijeljina that is situated in northeast Bosnia and Herzegovina. The club plays its home matches on the Bijeljina City Stadium, which has a capacity of 6,000 seats. The name Radnik means worker.

The club won its first First League of the Republika Srpska title in the 1998–99 season, and the second in the 2004–05 season, after which the club got promoted to the Premier League of Bosnia and Herzegovina. The club was relegated from the Bosnian Premier League in the 2006–07 season.

Under the leadership of manager Darko Nestorović, in the 2011–12 season, Radnik once again won the title in the First League of RS and won a second promotion to the Premier League of Bosnia and Herzegovina, where they have been playing ever since.

In the 2015–16 season, Radnik had, so far, their biggest success, winning its first national trophy, the Bosnia and Herzegovina Football Cup, after they beat FK Sloboda Tuzla in the two-legged cup final (1–1 in Bijeljina and 0–3 in Tuzla). Winning the cup, the club qualified to the 2016–17 UEFA Europa League qualifying rounds, its first UEFA competition.

Bijeljina Gradski Stadion is a multi-purpose stadium in Bijeljina, Republika Srpska, Bosnia and Herzegovina. It is currently used mostly for football matches and is the home ground of FK Radnik Bijeljina. The stadium has a capacity of 6,000 seats.
The record attendance on the stadium was on the concert of Željko Joksimović on 8 August 2013. Approximately 8,000 people were watching the concert that day