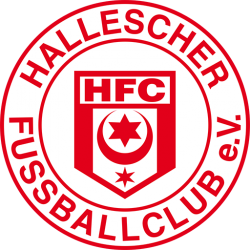 Hallescher FC, sometimes still called by its former name Chemie Halle, is a German association football club based in Halle an der Saale, Saxony-Anhalt. The club currently plays in the 3. Liga, the third highest level in the German football league system. For many years, Halle had been in East Germany's highest league, the DDR-Oberliga, up-until the German reunification. However, like many other teams from the former East, it then suffered the effects of economic and demographic decline in the region in the 1990s and fell down to amateur leagues. Since 2000, Hallescher FC has ended its downward trend and in the 2011–2012 season, they finally returned to a professional football league after 20 years of absence.

Erdgas Sportpark, is a stadium in Halle, Germany. It has a capacity of 15,057 spectators. It is the home of Hallescher FC and replaced Kurt-Wabbel-Stadion.