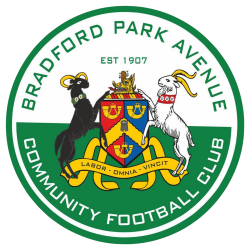 Bradford (Park Avenue) Association Football Club is a football club in Bradford, West Yorkshire, England. Its name, derived from its former home Park Avenue, was used to avoid confusion with Bradford City, but the club is traditionally known locally simply as Bradford.

The present club is a reincarnation of the club which played in the Football League from 1908 to 1970 before dropping to the Northern Premier League and going into liquidation in 1974. The new entity, established in 1987, currently competes in the National League North, the sixth tier of English football, and plays home matches at the 3,500-capacity Horsfall Athletics Stadium. Bradford are one of 35 clubs to compete in all four top tiers of English football. The new club started life at what was then the thirteenth tier: Division Three of the West Riding County Amateur League.

The club is a community benefit society owned by its supporters. Horsfall Stadium is a sports stadium just off Halifax Road in Bradford, West Yorkshire, England, 2.5 mi (4.0 km) south-west of the city centre. It is the home of Bradford (Park Avenue) A.F.C. and Bradford Airedale Athletics Club.

It was originally built as a running track in 1931, and was upgraded for football when Bradford (Park Avenue) moved to the stadium in 1994. The track was upgraded to a synthetic surface at the same time.

In 2007, a number of improvements were made to the ground, including a new directors' and sponsors' room, a meeting room for the players and management, a new medical room, kit room and toilets. In addition, fully monitored CCTV has been installed to protect the facility and prevent the vandalism that has plagued the ground in previous seasons. The main stand was also recently refurbished with seats, 1,800 of them coming from Lord's Cricket Ground. These changes were made due to new stringent ground grading requirements of the Football Association.

Avenue were ambitious to regain their league status and, in 2008, announced plans to move away from Horsfall, either to share Odsal Stadium with Bradford RLFC, or to move to a new stadium of their own. However, as of August 2017 no building work has started.