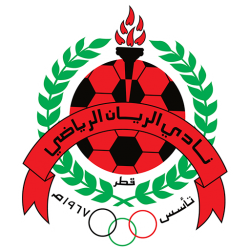 Al-Rayyan Sports Club is a Qatari professional sports club fielding teams in a number of sports such as football, futsal, basketball, volleyball, handball, athletics, table tennis and swimming. It is based at the Ahmed bin Ali Stadium in Omm Alafai in the city of Al Rayyan. The club was founded in 1967 after merging the old Rayyan team with Nusoor Club. The official team colours are red and black. The team is nicknamed is 'The Lions' and also 'Al-Raheeb' which means The Fierce.