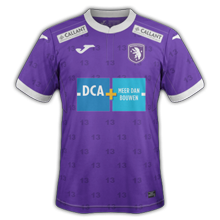 Koninklijke Beerschot Voetbalclub Antwerpen or shortly Beerschot, is a Belgian professional football club, located in Antwerp, that competes in the First Division B. The club is affiliated with the Royal Belgian Football Association since 1899 and has been allocated association number 155. In 2013, KFCO Wilrijk decided to integrate the identity of Beerschot AC when they were relegated in the 2012–13 season, not only through their league position but also due to losing their professional license through financial issues, being officially declared bankrupt on 21 May 2013 and folding shortly afterwards. Being the proud owners of the colours: purple and white they play their games on the club's home ground the Olympic Stadium often referred to as 't Kiel. The Olympisch Stadion was built as the main stadium for the 1920 Summer Olympics in Antwerp. For those games, it hosted the athletics, equestrian, field hockey, football, gymnastics, modern pentathlon, rugby union, tug of war, weightlifting and korfball (demonstration) events.Following the Olympics it was converted to a football stadium. Its current tenant is FCO Beerschot Wilrijk, a Belgian football club. There are no remnants of the Olympic athletics track.