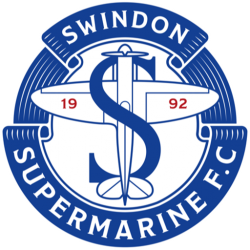 Swindon Supermarine Football Club is a semi-professional football club based in South Marston, Swindon, Wiltshire, England that plays in the Southern League Premier Division South. The club is affiliated to the Wiltshire Football Association. The club plays at The Webbswood Stadium, previously known as Hunts Copse situated close to the Honda plant in Swindon.

Swindon Supermarine play their home games at The Webbswood Stadium in South Marston. The ground used to be known as Hunts Copse prior to sponsorship. The ground possesses two adjacent seated stands with a combined total of 300 seats, a floodlit pitch, a shop and clubhouse, and a 6 ft perimeter fence. It is located near the Swindon Honda Plant and 4½ miles away from Swindon station.

The improvements necessary for the club to step up to the Southern League in 2001 saw the building of a new 225-seater stand, taking the total covered seating capacity to 300, as well as new perimeter fencing and toilets. Although not required to meet the league's guidelines, new floodlights were put in place at the same time. At the close of the 2016–17 season, a new community facility was formally opened at the ground that included a recently built changing rooms block.