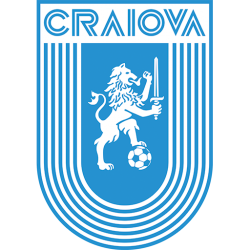 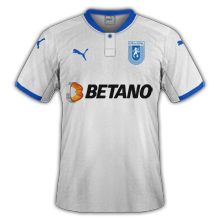 U Craiova 1948 Club Sportiv, commonly known as Universitatea Craiova, U Craiova, or CS U Craiova, is a Romanian a professional football team based in Craiova, Dolj County, currently playing in the Liga I, the top tier of the Romanian football league system.

It was founded in 1948 as the football section of the CSU Craiova sports club, of which it was originally part of until 1991. During that period, it had won four national titles and five national cups. For the next two decades, its tradition was taken further by FC U Craiova, which was reorganised several times, disaffiliated and retroactively deemed as an unofficial successor. In 2013, the sports club refounded the football department, which asserts to be the continuation of the original Universitatea Craiova—this has since been backed up by some court orders and the Liga Profesionistă de Fotbal, however the record is still subject of dispute with the also reestablished FC U entity and uncertainty persists. In 2018, "the White-Blues" won the Cupa României, representing their first trophy following the refoundation.

"The Students" play their home matches at the Stadionul Ion Oblemenco, which has a capacity of 30,929. Craiova holds several rivalries, the most notable being the one with Dinamo București.

Stadionul Ion Oblemenco is a football stadium in Craiova, Romania. The all-seater stadium opened in 2017 and has a capacity of 30,983, the fourth largest football ground in Romania. It is in the immediate vicinity of the new Polyvalent Hall.

The stadium ranked fourth overall among stadiums in the world opened in 2017 surpassing expectations, ranking higher than Wanda Metropolitano or Gazprom Arena. On 26 February 2018, the Stadionul Ion Oblemenco was selected as a finalist from 27 submissions by the jury. Architects generally agreed that the outcome was satisfying, with decent investment results.