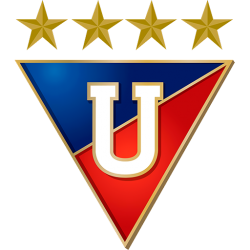 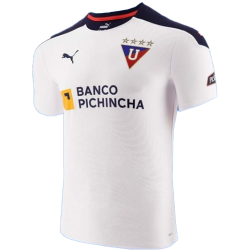 Liga Deportiva Universitaria, often referred to as Liga de Quito, LDU, is an Ecuadorian professional football club based in Quito. They play in the Serie A, the highest level of the Ecuadorian professional football league. They play their home games at the Estadio Rodrigo Paz Delgado, more commonly referred to as Casa Blanca. Rival clubs include Quito-based clubs El Nacional, Deportivo Quito, Aucas and Universidad Católica.

Liga Deportiva Universitaria has its roots in the semi-pro sports teams in 1918 competing as "Universitario" at the Central University of Ecuador, and was officially founded on January 11 of 1930. They began making an impact in the provincial leagues, winning nine Pichincha titles (six in the professional era). Their provincial success continued into the national league, where they have won 11 national title (4th overall) having won their most recent title in 2018. They are the most successful Ecuadorian club in international competitions, where they were the first Ecuadorian club to win the Copa Libertadores (2008), the Copa Sudamericana (2009), and the Recopa Sudamericana (2009 and 2010). They are one of only six teams —Boca Juniors, Independiente, River Plate, Internacional and São Paulo being the other five— to have achieved the CONMEBOL treble, winning all three continental club tournaments. LDU is the only team to win all three mentioned cups one after another between the years 2008 to 2010 causing them to be rated as the best South American team of 2008 and 2009. Liga de Quito was additionally the runner-up at the 2008 FIFA Club World Cup.

Estadio Rodrigo Paz Delgado, commonly called La Casa Blanca (Spanish for "The White House"), is a football stadium in Quito, Ecuador that is the home ground of LDU Quito. Built between 1995 and 1997, the stadium hosted its first match on March 6, 1997 in a game between LDU Quito and Atlético Mineiro of Belo Horizonte. With a capacity of 41,575, it is the largest stadium in Quito, and the second largest in Ecuador after the Estadio Monumental Banco Pichincha in Guayaquil.

Since its inauguration, the stadium has been home to LDU Quito's greatest period of success where it has won six national titles and four international titles, thus making Liga Deportiva Universitaria the most successful team in the history of Ecuadorian football. In addition, Barcelona SC has never been able to defeat Liga at this stadium.

The Ecuadorian national team used this stadium twice during the 2002 FIFA World Cup qualification on March 29, 2000 against Venezuela and August 15, 2000 against Bolivia. Ecuador won both games.