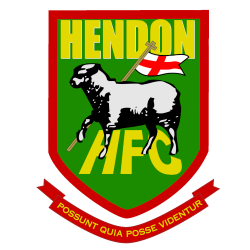 Hendon Football Club is a semi-professional football club based in Kingsbury in the London Borough of Brent. They are currently members of the Southern League Premier Division South and play at Silver Jubilee Park in Kingsbury.

In 1912–13 Hampstead Town were runners-up in Division One of the London League, earning promotion to the Premier Division (Amateur); they also won the Middlesex League. The following season saw them win both the Middlesex League and the Premier Division (Amateur) of the London League. This success saw the club admitted to the Athenian League for the 1914–15 season. However, the league was abandoned after two games due to World War I. After the war they played in the United Senior League in the 1918–19 season and won the league, before returning to the Athenian League when it restarted in 1919. The club was renamed Hampstead in 1926. They were Athenian League runners-up in 1928–29 and again in 1932–33, before being renamed Golders Green in 1933. They reached the first round of the FA Cup for the first time in 1934–35, losing 10–1 at Third Division South Southend United. In 1946 the club was renamed again, adopting its current name, that of a club that existed in the 19th century.

Hendon reached the final of the FA Amateur Cup again the following season, but lost 3–1 to Wealdstone. After winning their third Amateur Cup with a 2–0 win against Enfield in 1971–72, a second Isthmian League title was won in 1972–73. The following season they reached the third round of the FA Cup, where they drew Newcastle United; after holding them to a 1–1 draw at St James' Park, Hendon lost 4–0 in a replay played at Watford's Vicarage Road. In 1975–76 the club defeated a Football League club for the first time, beating Reading 1–0 in the first round, before losing to Swindon Town in the second round.

In 2003–04 Hendon finished fourth in the Isthmian League Premier Division but declined to join the new Conference South. Having remained in the top division of the Isthmian League since joining it in 1963, Hendon finished in the relegation zone at the end of the 2005–06 season, but were reprieved after Canvey Island's resignation from the Football Conference. During the summer of 2010, the club was bought out by the Hendon FC Supporters Trust, an Industrial and Provident Society. In 2014–15 they were Premier Division runners-up, qualifying for the promotion play-offs; after beating Metropolitan Police 2–1 in the semi-finals, they lost the final 1–0 to Margate. The 2017–18 season saw the club finish third in the Premier Division. In the subsequent play-offs, they defeated Folkestone Invicta 4–0 in the semi-finals before losing the final 4–3 on penalties to Dulwich Hamlet. The club were placed in the Premier South Division of the Southern League for the 2018–19 season as part of the restructuring of the non-League pyramid.

The club moved to Claremont Road in Cricklewood in 1926. The first match was played on 18 September, an FA Cup game against Berkhamsted that Hendon won 4–3. The ground was also briefly used by rugby league club London Broncos. In the mid-2000s the ground was sold to property developers and it was initially planned that the club would move to Barnet Copthall. However, the proposed move fell through and although Hendon had initially expected to leave in 2006, they were still at the ground in 2008; the final match at Claremont Road on 20 September 2008 saw local rivals Wealdstone win 4–1.

After leaving Claremont Road Hendon played at Northwood's Chestnut Avenue, Staines Town's Wheatsheaf Road for the remainder of the 2008–09 season. They then moved to Wembley's Vale Farm before relocating to Harrow Borough's Earlsmead ground in 2013. In 2016 they moved to Silver Jubilee Park in Kingsbury, groundsharing with Edgware Town.