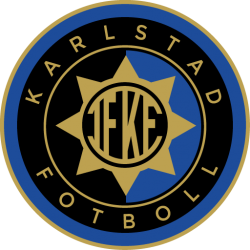 Karlstad BK is a Swedish football club located in Karlstad in Värmland County.

Since their foundation on 19 October 1923 Karlstad BK has participated mainly in the second and third tiers of the Swedish football league system. As of 2012 the club currently plays in Division 1 Södra, which is in the third tier of Swedish football. This was not the case in recent years—from 2000 to 2007 KBK were playing in Div 4 Värmland which was the fifth tier and then the sixth tier from 2006. Promotions in 2007 and again in 2009 have enabled the club to restore some pride, especially as they pipped local rivals FBK Karlstad to the play-off spot. They play their home matches at the Våxnäs IP and Tingvalla IP in Karlstad.

The club is affiliated to the Värmlands Fotbollförbund. As the football club Karlstad BK (KBK) is about to play its matches in Division 2 (4th highest level) on Tingvalla IP, the municipality decided in 2010 to make a small renovation of the facility, including a new stand for 250 persons, a new match clock and new fences.