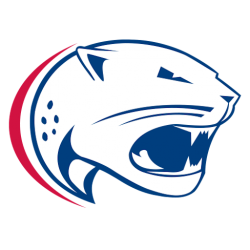 The South Alabama Jaguars men's basketball program has competed in the Sun Belt Conference since 1978 when the league was formed. Since 1968, the Jaguars have compiled an overall record of 694–507 (.580). Ronnie Arrow returned as head coach in 2007, succeeding John Pelphrey after the 2006–07 season. In his three seasons succeeding Pelphrey, Coach Arrow was 63–34 (64.9%), and is 177–127 (58.2%) all time at South Alabama. He retired December 19, 2012 and was replaced by Jeff Price on an interim basis. On March 25, 2013, Matthew Graves was named as the new head coach of the Jaguars. On March 8, 2018, Graves was fired after 5 seasons after a 65–96 record with no postseason appearances. Exactly 1 week later, the Jaguars hired former Nicholls State head coach Richie Riley for the job. In Coach Riley's first year at the helm of the Jaguars, he led the program to their first non-losing season since 2013, finishing the year at 17-17.

Mitchell Center is a 10,041-seat multi-purpose arena on the campus of the University of South Alabama in Mobile, Alabama. It was completed in 1998 and is the home court for University of South Alabama Jaguars basketball teams. The Center is named for the Mitchell family, local real estate developers who have given over US$35 million to various University causes (both the Mitchell Cancer Institute and the Mitchell College of Business are named for them), including $1 million for construction of the Center.
The venue can seat 3,500 for theatrical presentations, 7,354 for front-of-arena concerts, 8,777 for the circus and auto racing, and 10,800 for full-arena concerts.