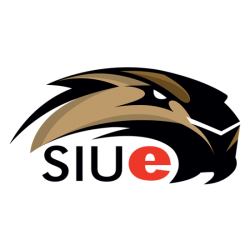 The SIU Edwardsville Cougars men's basketball team represents Southern Illinois University Edwardsville (SIUE) in the Ohio Valley Conference of NCAA Division I basketball. The Cougars play their home matches at the Sam M. Vadalabene Center located in the SIUE core campus in Edwardsville, Illinois.
The SIUE basketball program first entered competition on November 23, 1967 under the leadership of Naismith Memorial Basketball Hall of Fame coach Harry Gallatin. The newborn program had no scholarships, inadequate facilities, and very little money to work with. Home games were played at the Shurtleff College gymnasium in Alton, usually with crowds of fewer than a dozen fans in attendance. Gallatin departed as the program's coach after three years (while remaining as athletic director and golf coach for many years) with a record of 19–31.

The Sam M. Vadalabene Center--- also known as "The VC" --- is a multi-purpose sports and recreation building on the campus of Southern Illinois University Edwardsville (SIUE) that features an arena with a seating capacity of just over 4,000. The facility, which opened in 1984, was named in honor of Illinois State Senator Sam M. Vadalabene (1914–1994), who was a long-time and ardent supporter of the university. The VC is home to the SIUE Cougar basketball, volleyball, and wrestling teams. In addition to the arena, the facility also houses a swimming pool, classrooms, offices, and several activity areas. The Student Fitness Center (SFC), built in 1993, is immediately adjacent to and an integral part of the VC and contains numerous additional recreational and fitness facilities.