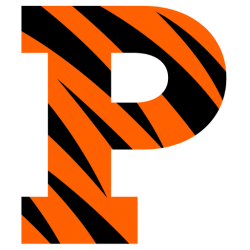 The Princeton Tigers men's basketball team is the intercollegiate men's basketball program representing Princeton University. The school competes in the Ivy League in Division I of the National Collegiate Athletic Association (NCAA). The Tigers play home basketball games at the Jadwin Gymnasium in Princeton, New Jersey on the university campus. Princeton has won six Eastern Intercollegiate Basketball League championships, 27 Ivy League championships, and the 1975 National Invitation Tournament. The team is currently coached by Mitch Henderson.
The team is known for the Princeton offense perfected under the tenure of former head coach Pete Carril who coached the team from 1967 to 1996. The Princeton offense has resulted in Princeton leading the nation in scoring defense 20 times since 1976 including every year from 1989 to 2000. The Tigers entered the 2009–10 NCAA Division I men's basketball season with 1,552 career victories (which ranked 23rd among the 347 NCAA Division I programs), 24 NCAA Men's Division I Basketball Tournament appearances (including four consecutive appearances between 1989 and 1992), and 5 National Invitation Tournament appearances.

The L. Stockwell Jadwin Gymnasium is a 6,854-seat multi-purpose arena at Princeton University in Princeton, New Jersey. The arena opened in 1969. It is home to the Princeton Tigers college basketball teams. It replaced Dillon Gymnasium, the home of Princeton volleyball and wrestling, as the fifth main basketball arena on campus.
In 1965, the mother of Leander Stockwell Jadwin, class of 1928, gave a gift of $27 million to the university in his name. He had been the captain of the track team and had died just months after graduation in an automobile accident. The school decided to use $6.5 million towards the building of the gymnasium, which had just barely been started.