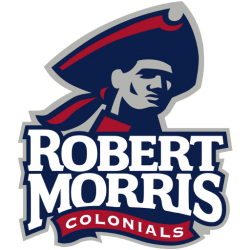 The Robert Morris Colonials men's basketball team is the basketball team that represents Robert Morris University in Moon Township, Pennsylvania, United States. The school's team currently competes in the Northeast Conference. The Colonials current head coach is Andrew Toole who is in his eighth season at RMU. Toole was hired when, after three years in charge and 73 wins, head coach Mike Rice Jr. left the program in 2010 to take the head coaching job at Rutgers.
The team's most recent appearance in the NCAA Division I Men's Basketball Tournament was in 2015, where the Colonials beat North Florida in the First Four, but then suffered a loss to No. 1-seeded Duke (the eventual national champion) in the First Round. Five years earlier, in the 2010 NCAA Tournament, the 15th-seed Colonials nearly upset No. 9-ranked Villanova in the First Round before losing in overtime. The team is also known for its upset over No. 1-seeded (and 2012 national champion) Kentucky at the buzzer in the opening round of the 2013 National Invitation Tournament and another upset over traditional Big East powerhouse St. John's in the opening round of the 2014 NIT. However, in both cases, the Colonials lost in the second round.

UPMC Events Center is an indoor arena located in the Pittsburgh suburb of Moon, Pennsylvania as a part of Robert Morris University, replacing the old Charles L. Sewall Center. The UPMC Events Center is the new home of the Robert Morris Colonials men's and women's (NCAA) Division I basketball and women's volleyball teams. The UPMC Events Center was originally scheduled to open in January 2019. However, it later opened in May 2019 after the men's basketball team announced all of their 2018-19 games would be played at the North Athletic Complex on campus.
In 2013, a survey was conducted to see if a new sporting and athletic center would be wanted for the university and in 2016, the survey results concluded in an overwhelming favor for the construction of a new sports center.