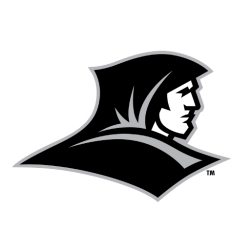 The Providence Friars men's basketball team represents Providence College in NCAA Division I competition, and they are a founding member of the Big East Conference. They play their home games at the Dunkin' Donuts Center in Providence, Rhode Island. Since 2011, the head coach is Ed Cooley.
The Friars have made two Final Four appearances in the NCAA Division I Men's Basketball Tournament, in 1973 and 1987. Four former players or coaches—Dave Gavitt, John Thompson, Rick Pitino, and Lenny Wilkens—are enshrined in the Naismith Memorial Basketball Hall of Fame. In addition, two-time NCAA Men's Division I Basketball Tournament champion, current Oklahoma City Thunder head coach Billy Donovan, helped lead the Friars (as a player) to the Final Four in 1987. The Dunkin' Donuts Center (originally Providence Civic Center) is an indoor arena located in downtown Providence, Rhode Island. It was built in 1972, as a home court for the emerging Providence College men's basketball program, due to the high demand for tickets to their games in Alumni Hall, as well as for a home arena for the then-Providence Reds, who played in the nearly 50-year-old Rhode Island Auditorium. Current tenants include the Providence Bruins, of the AHL and the Providence College men's basketball team.
The Providence Civic Center was constructed in 1972 on the site of an old jewelry factory. The opening ceremony was held November 3, 1972, with a Providence Reds hockey game. President Richard Nixon, campaigning in the area, was invited to the attend the opening, but he declined. In its first year, the center hosted concerts by Pink Floyd and Frank Sinatra, as well as hockey games and political rallies, and was considered a success.