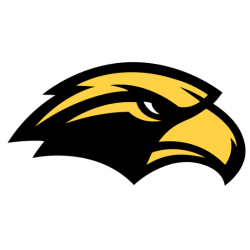 The Southern Miss Golden Eagles basketball program represents intercollegiate men's basketball at the University of Southern Mississippi. The school competes in the Conference USA in Division I of the NCAA and plays their home games at Reed Green Coliseum, which has a capacity of 8,095.
From its first season (1912–13), when Coach R. G. Slay led the team to a 3–0 record, the men's basketball team has enjoyed its share of success. Coach A. B. Dille took over coaching duties the following year. The Golden Eagles have appeared in the NAIA National Tournament four times in a row (1952, 1953, 1954 and 1955). Southern Miss had a 2–4 record in the NAIA Tournament.
Over the years, the Golden Eagles have had three NCAA teams. The program has also had an NIT Championship team with its run in the 1987 postseason tournament. The team has had six players drafted including Clarence Weatherspoon. Southern Miss has won two conference championships in basketball including a share of the 2001 regular-season title

Reed Green Coliseum is an 8,095-seat multi-purpose arena in Hattiesburg, Mississippi, United States. Affectionately referred to by fans and local sportswriters as "The Yurt", it opened on December 6, 1965 and is home to the University of Southern Mississippi (USM) men's basketball team, women's basketball team and women's volleyball team. Prior to the Coliseum, USM's teams played at the USM Sports Arena, a 3,200-seat arena opened in 1949.
It is the Hattiesburg area's premier sports and entertainment venue. It is named for Reed Green, who attended the university and went on to serve as its coach and athletics director.