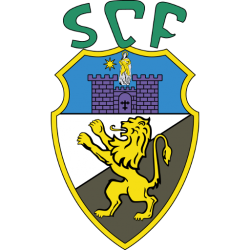 Sporting Clube Farense, simply known as Farense, is a Portuguese professional football club based in Faro in the district of the same name. Founded in 1910, the club will play the 2021–22 season in the Liga Portugal 2 after relegation from the Primeira Liga.

In its entire history, the club has won nine major trophies: the AF Algarve Championship five times, the Segunda Divisão twice, and the Terceira Divisão and AF Algarve First Division once. Aside from its major trophies, the club as of 2013, has played 23 seasons in the Primeira Liga of which their highest league table classification came in the 1994–95 season where they managed a fifth-place finish.

On the back of that best-ever finish, Farense qualified for the UEFA Cup for the first time, losing in the first round to Olympique Lyonnais by a single goal in each game. The club also reached the final of the Taça de Portugal in 1990 where they lost to Estrela da Amadora. Among the mainstays of their 1990s teams were the Moroccan attacking duo of Hajry Redouane and Hassan Nader.

The 2001–02 season saw the club relegated to the second tier of Portuguese football, and in 2012–13 they were promoted to the Segunda Liga. In 2019–20, after the season was curtailed due to the COVID-19 pandemic, the club were promoted back to the top flight after 18 years, under manager Sérgio Vieira. One year later, they were relegated on the final matchday after a 4–0 loss at C.D. Santa Clara.

Estadio de São Luís is a multi-use stadium in Faro, Portugal. It is used mostly for football matches and hosts the home matches of S.C. Farense. The stadium is able to hold 15,000 people and opened in 1922. It was used continuously by Farense between 1924, when it became the main tenant of the stadium, and 2004, when the club moved to the newly built Algarve Stadium. Farense has been playing back at the renovated São Luís since 2013.