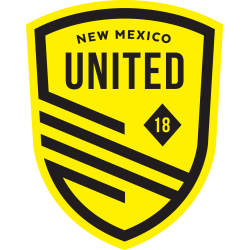 New Mexico United is an American professional soccer team based in Albuquerque, New Mexico. Founded in 2018, the team plays in the USL Championship, the second division of American soccer.

History
Former teams
The state of New Mexico gained its first professional soccer team in the 1990s, the New Mexico Chiles of the American Professional Soccer League and later the USISL. The team was runner-up for the league title in 1995 and attracted an average home attendance of 3,854, but was folded by its owners in 1996. The Chiles was replaced the following season by the Albuquerque Geckos, who entered USISL's Division 3 with new owners and played at a new soccer stadium shared with the collegiate New Mexico Lobos. The Geckos won the Division 3 championship and were promoted to the second division A-League in 1998, but struggled to win matches and were unable to pay players and creditors. The team had an average attendance of 1,200 and announced their move to Sacramento, California in October 1998.

A semi-professional team, the Albuquerque Sol, was established in 2014 to capitalize on the area's interest in soccer. The team's owners stated that their goal was to earn a USL expansion team within a few years and eventually move to Major League Soccer (MLS). The Sol commissioned a study in 2016 to analyze a potential downtown soccer-specific stadium with 10,000 seats to support a USL expansion in 2018 and a MLS expansion by 2024. The stadium study identified three potential locations in downtown Albuquerque for a stadium, which would cost $24–45 million.

Isotopes Park is a minor league baseball stadium located in Albuquerque, New Mexico and is the home field of the Albuquerque Isotopes of the Pacific Coast League, the Triple-A affiliate of the Colorado Rockies. The facility was also previously used by the baseball program of the University of New Mexico. The stadium also hosts New Mexico United, an expansion team in the United Soccer League that began play in 2019.