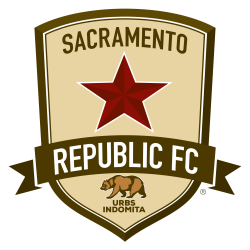 Sacramento Republic Football Club is an American professional soccer team based in Sacramento, California. It plays in the Western Conference of the USL Championship. Co-founded by Warren Smith and Joe Wagoner in 2012, the team started to play in 2014 at Hughes Stadium, a 20,231 seat stadium. They moved mid-season to their current home at Papa Murphy's Park. Since then, Republic FC won the 2014 USL championship and made the playoffs four times.

With fan support and attendance, the team prepared an expansion bid for Major League Soccer, which was submitted in January 2017. On May 15, 2017, MLS bid proponent Sac Soccer & Entertainment Holdings, led by Kevin Nagle, officially acquired Sacramento Republic FC from president and co-founder Warren Smith. On October 21, 2019, MLS announced that Sacramento Republic will be the 29th team in MLS, slated to start in 2022. The team is working with the city of Sacramento to build a $226 million stadium in the large Railyards urban infill project.

Papa Murphy's Park (formerly known as Bonney Field) is a sports venue located on the grounds of Cal Expo in Sacramento, California. The soccer-specific stadium has a capacity of 11,569 and includes a full-sized (120 x 80 yard) soccer field. Papa Murphy's Park is the current home of Sacramento Republic FC soccer team and former home of PRO Rugby team, Sacramento Express.

The field is located on the former site of the Cal Expo Amphitheatre, and is bordered on the west and south by the Cal Expo monorail, and on the east by Raging Waters water park.