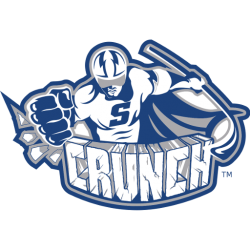 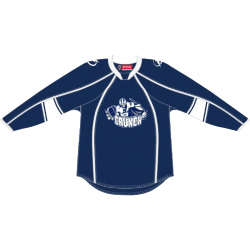 The Syracuse Crunch are a professional ice hockey team in the American Hockey League (AHL). They play in Syracuse, New York, at the Upstate Medical University Arena at Onondaga County War Memorial. They are the primary development affiliate of the National Hockey League's Tampa Bay Lightning.
The 2018–19 season was the best season the Crunch has had during the 76-game schedule format. The Crunch tied a team record in points with 102, and tied a franchise record in wins with 47. Eddie Pasquale won the Harry "Hap" Holmes Memorial Award, Carter Verhaeghe won the John B. Sollenberger Trophy, and Verhaeghe and Alex Barre-Boulet both won the Willie Marshall Award, as they both tied for the league lead in goals scored. The Crunch also achieved 900 franchise victories with a 6–2 win over the Utica Comets on March 30, 2019. The Crunch won their third division title in the Tampa affiliation, but were upset in four games by the Cleveland Monsters. The Upstate Medical University Arena at Onondaga County War Memorial (originally known as Onondaga County War Memorial) is a multi-purpose arena located in Syracuse, New York. It is part of the Oncenter Complex. Designed by Edgarton and Edgarton and built from 1949 through 1951, the structure is significant as an example of a World War I, World War II and Aroostook War commemorative and as "an early and sophisticated example of single-span thin-shell concrete roof construction." It was listed on the National Register of Historic Places in 1988. The Upstate Medical University Arena has been renovated twice, in 1994 and 2018.