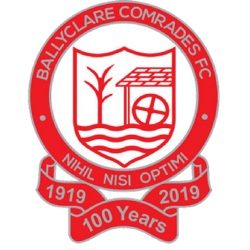 Ballyclare Comrades Football Club is a semi-professional, Northern Irish football club playing in the NIFL Championship. The club hails from Ballyclare, County Antrim and plays its home matches at Dixon Park. Club colours are red and white. The club's rivals are Carrick Rangers and Larne and games between the three clubs are referred to as "The East Antrim Derbies".

The club was founded in 1919 by veterans of the First World War, most of them from "C" Company of the 12th Royal Irish Rifles – a battalion made up entirely of East Antrim men, who fought at the Somme and in many other famous First World War battles. From 1990 until 2003, the club enjoyed senior status, but reverted to intermediate status when the Irish Premier League was established and the number of senior clubs was reduced.

The club's reserve team play in the NIFL Development League for under 20s. The club also has a partnership with local youth club Ballyclare Colts, whose sides (from under 11 to under 15) provide players to progress to Comrades' own youth sides at under-17 and under-18 level. The under-18 side play in the IFA Youth League.

The club was relegated to IFA Championship 2 in the 2010–11 season and finished in 6th place in the 2011–12 season, but the following season brought promotion back to Championship 1 after finishing as runners-up behind Championship 2 winners Knockbreda. One of the clubs most famous products was Northern Ireland and Sunderland defender Paddy McNair who attends games when possible. Gareth McAuley, now of Rangers, and Michael Smith (Hearts) both played for the Comrades before switching to professional football.

The club finished an impressive 3rd in the 2016/17 season, losing out in a promotion playoff to Institute. The club continues with the ambition of getting back into the NIFL Premiership.

Dixon Park is a football stadium located in Ballyclare, County Antrim, Northern Ireland. It is home to Ballyclare Comrades F.C.

Features
The stadium holds 4,000, but is currently restricted to 1,800 under safety legislation. There is a small seated stand at one side, where the changing rooms and club offices are sited. There are covered standing areas behind each goal, and a standing area opposite the stand. The Comrades Social Club is located right beside the ground.

Development
In the spring of 2010 work was carried out at the Ballyclare venue to supply new and additional seating, improve terraced views and provide modern toilets and press facilities.

The improvement works carried out by Ballyclare Comrades, in conjunction with Sport Northern Ireland, were designed to bring the stadium up to IFA Premiership standard - one of the benchmarks of which is the provision of 500 covered seats.

This has now been achieved with the building of a new 350-seat stand and additional seating added to the existing stand and in the visitors' enclosure behind the goal.