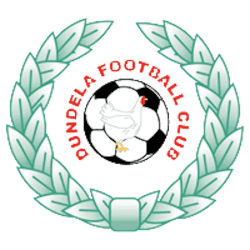 Dundela Football Club, nicknamed "The Duns" is a semi-professional, Northern Irish football club from Belfast, currently playing in the NIFL Championship, and plays its home matches at Wilgar Park. The club's colours are green and white. The home kit has green shirts, green shorts and green socks, whilst the away kit is all red. The current manager is Bryan McCarroll.

Dundela Football Club was formed in 1895 from employees of a local dairy owned by the Agnew family and members of a local harriers' club. Wilgar Park has been the home to the club since 1900. The park lies in the heartland of east Belfast, in a suburb named Strandtown. Its capacity is 2,500. The venue is nicknamed "The Hen Run". The club's greatest achievement to date came in April 1955, when it defeated Glenavon by three goals to nil at Windsor Park, Belfast in the final of the Irish Cup. Dundela's darkest hour occurred on 25 August 1995, when team captain, Michael Goddard died during a game at Stangmore Park, home of Dungannon Swifts, after being struck on the chest with the ball. The club's latest success was an Intermediate League title in the 2017-18 season. Dundela's local rivals are Harland & Wolff Welders.