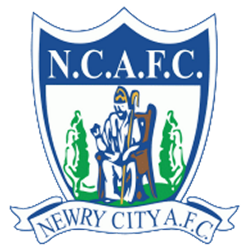 Newry City Athletic Football Club is a semi-professional Northern Irish football club who play in the NIFL Championship. It is based in Newry, County Down and plays at the Showgrounds. The club's colours are blue and white, with striped jerseys and blue shorts.

The club was created in 2013 after the city's former semi-professional club, Newry City F.C. was dissolved in September 2012, when a winding-up petition brought against the club by former player and manager Gerry Flynn was granted, and the club decided not to appeal the decision. This led to the majority of Newry City's players leaving for Warrenpoint Town. The new club, wearing the same colours and having the same home as its predecessor, is regarded as a phoenix club, but has, and claims, no legal connection to the former club business.

The stadium is located in the Greenbank Industrial Estate on the Warrenpoint Road, close to the Down GAA stadium Páirc Esler.