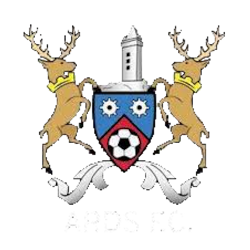 Ards Football Club is a semi-professional, Northern Irish football club playing in NIFL Championship. The club, founded in 1900, is based in Newtownards, but plays its home matches at Clandeboye Park in Bangor, which it shares with rivals Bangor. The club colours are red and blue.

Clandeboye Park, known for commercial reasons as the Bangor Fuels Arena, is a football stadium in Bangor, Northern Ireland. It is the home ground of Bangor and Ards.

At one time, the pitch was the smallest in the Irish league, but it no longer holds this distinction since the pitch was enlarged after the stock-car racing track was removed in the later years of the twentieth century.