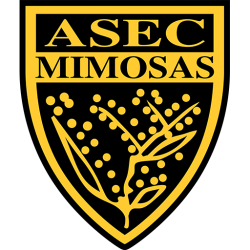 The Association Sportive des Employés de Commerce Mimosas, literally Mimosas Commerce Employees' Sporting Association, is an Ivorian football club based in Abidjan. The club is also known as ASEC Mimosas Abidjan and ASEC Abidjan, especially in international club competitions. Founded in 1948, they are the most successful side in Ivorian football, having won the Ivorian Premier Division 24 times and the 1998 CAF Champions League. In addition, ASEC's Académie MimoSifcom has produced a number of famous players now based in top foreign leagues, including Bonaventure Kalou, Didier Zokora, Emmanuel Eboué, Gervinho, Salomon Kalou, Romaric, Boubacar Barry, Didier Ya Konan, Kolo Touré and Yaya Touré, all of whom have played internationally.

Stade Félix Houphouët-Boigny, nicknamed Le Félicia, is a multi-purpose stadium, which can host football, rugby union and athletics, in Abidjan, Ivory Coast. It is the national stadium of the Ivory Coast national football team. It is named after the first president of the country, Félix Houphouët-Boigny, and is located in the commune of Le Plateau. The stadium has a capacity of 50,000. It also hosts matches of ASEC Abidjan. It has been the site of several deadly stampedes.