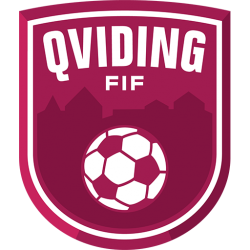 Qviding FIF is a Swedish football club located in Gothenburg. The club was formed October 1987 following a merger of the BK Qviding and Fräntorps IF clubs. Qviding FIF is currently playing in Division 1 Södra.

In recent years the club has had 4 seasons in the Superettan. Qviding FIF are affiliated to the Göteborgs Fotbollförbund.

Valhalla IP has been their home ground since 2008, having previously played at Torpavallen.

Valhalla IP is a stadium in Gothenburg, Sweden which is home to several teams, for both Damallsvenskan and Division 1, Qviding FIF and the ladies team Kopparbergs/Göteborg FC. The stadium is situated close the river Mölndalsån and Burgårdsparken of the town and is named after the Valhalla (Old Norse Valhöll, "Hall of the Slain") is Odin's hall in Norse mythology. The capacity of the stadium is 4,000, where 1,200 are seated. Valhalla IP had an artificial pitch added in October 2006.

On October 19, 2008, during a football match between Örgryte IS and FC Väsby United, after one minute of play a railing in the stands collapsed when fans celebrated a goal scored by Marcus Allbäck. Up to forty spectators fell down on the field, a few suffered minor injuries and one spectator was taken to hospital.