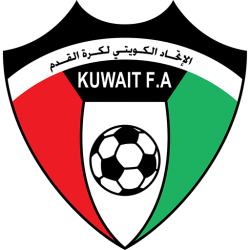 The Kuwait national football team is the national team of Kuwait and is controlled by the Kuwait Football Association. Kuwait made one World Cup finals appearance, in 1982, managing one point in the group stages. In the Asian Cup, Kuwait reached the final in 1976 and won the tournament in 1980.

Kuwait's 20–0 win over Bhutan in 2000 was at the time the biggest ever victory in international football. It was surpassed in 2001, when Australia beat American Samoa 31–0.

While Kuwait is one of Asia's major football force during 1970s to 2000s, the strength of the national team has started to fade slowly from 2010s, with Kuwait failing in two consecutive Asian Cups in 2011 and 2015, before being disqualified for 2019 edition. The team has also failed to reach any World Cup since 1982.

Jaber al-Ahmad International Stadium (Arabic: ملعب جابر الأحمد الدولي‎) is a multi-purpose stadium in the Ardhiyah area of Kuwait City, Kuwait. Completed in 2009, it is used mostly for football matches and athletics. The stadium has a capacity of 60,001 seated spectators, the building is constructed in 4 levels, with 54 corporate boxes and parking lot with a 6,000 car capacity. It was expected to open in second quarter of 2010, but the building failed structural-integrity testing and remained closed due to a miscalculation by structural engineers for nearly half a decade. However it was finally opened on 18 December 2015. Jaber Al-Ahmad stadium is currently the new home of the Kuwait national football team.

The stadium was named after late Amir of Kuwait Shaikh Jaber Al-Ahmad Al-Sabah. Kuwait celebrated their winning of Gulf Cup 20 in that stadium.