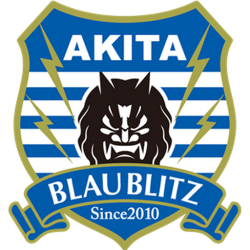 Blaublitz Akita (ブラウブリッツ秋田, Burauburittsu Akita) (formerly TDK S.C.) is a Japanese professional association football team based in Akita, Akita Prefecture. In 2014 they entered the J3 League after previously playing in the Japan Football League, the third tier of the Japanese association football league system. Due to the club's former ownership by TDK, most of players were the employees of TDK's Akita factory.

Soyu Stadium, formerly known as Akita Yabase Athletic Field (秋田市八橋運動公園陸上競技場, Akitashi Yabase Undōkōen Rikujōkyōgijō), is an athletic stadium in Akita, Akita, Japan. Located approximately 3 kilometers from the city center, the Akita Yabase Stadium is a multi-use facility opened in September 1941. It has been renovated several times, including a complete rebuilding in 1981, track repairs in 1985, and modifications in 1995 to accommodate the requirements for J.League soccer.

The stadium was the main venue for the World Games 2001. It also hosted the National Sports Festival of Japan in 2007. The facilities is the home stadium for the Blaublitz Akita, a J.League team.