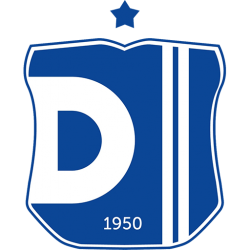 Futboll Club Dinamo Tirana is an Albanian professional football club based in the country's capital Tirana. They will play in the Kategoria e Parë, the second tier of Albanian football, in the 2022–23 season.
They play their home games primarily at the Selman Stërmasi Stadium, as well as other grounds in the city. Founded in 1950 during the communist regime, the club was historically affiliated to the Interior Ministry and having won 18 National Championships, it is considered to be the second most decorated club after local rivals KF Tirana.

Internacional Complex (Albanian: Kompleksi Internacional) is a football training facility located in Pezë Helmës, Tiranë, Albania. The complex consists of two football stadiums, the 1,000 seater Pezë Helmës Stadium and the 500 seater Pezë Helmës Stadium II. It is opened and operated by Internacional Tirana, and some Albanian football clubs use the facility for training such as Kukësi and Partizani. Many lower league sides use the facility to host games, as both stadiums meet the licensing requirements to host games up to the Albanian First Division.