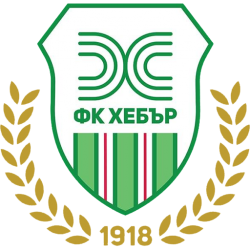 FC Hebar (Bulgarian: Футболен клуб Хебър) is a Bulgarian association football club based in Pazardzhik. The club currently competes in the Second League, the second tier of the Bulgarian football league system.

Founded in 1918, they have played at their current home ground, Georgi Benkovski Stadium, since 1989. Hebar have played a total of three seasons in the top level of Bulgarian football, most recently in 2001. Despite finishing ninth that season, the owners of the club moved it to Petrich, becoming Belasitsa Petrich. Fans from Pazardzhik re-founded the club the same year, starting from the amateur levels. For the majority of its history, the club has played either in the second or third levels of the football pyramid.

Stadion Georgi Benkovski (Bulgarian: Стадион „Георги Бенковски“, English: 'Georgi Benkovski Stadium') is a multi-use stadium in Pazardzhik, Bulgaria. It is currently used mostly for football matches and is the home ground of PFC Hebar Pazardzhik. The stadium holds 13,128 people and was built in 1989.