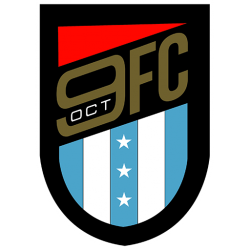 9 de Octubre Fútbol Club, simply referred to as Nueve (9) de Octubre, is a sports club based in Guayaquil, Ecuador. The club is best known for its football team.

The club was found on April 18, 1926 as Club 9 de Octubre. The club's name commemorates the date the region of Guayas, with its seat in Guayaquil declared their independence from Spain (October 9).

During its amateur years, the football team won two Guayas champions in 1940 and 1946. The team turned professional in 1962, and participated in the national championship that same year. The following year, the club was runner-up in the professional Guayas tournament. In 1965, the team was national runner-up, which allowed them to participate in their first Copa Libertadores. They achieved back-to-back runners-up in 1983 and 1984, and is seen as the peak of the club's football success. Since then, the team has descended in the Ecuadorian football league system to the third level of football, the Segunda Categoría.