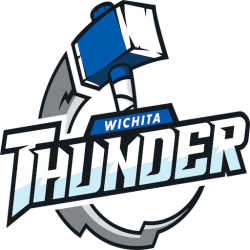 The Wichita Thunder are a minor league hockey team based in Wichita, Kansas. The team played in the Central Hockey League from 1992 until 2014, and then in the ECHL since the 2014–15 season. From 1992 until December 2009, the Thunder played in the Britt Brown Arena located in the northern Wichita suburb of Park City. In January 2010 (the second half of the 2009–10 season), the team began playing its home games at the newly built Intrust Bank Arena.

Intrust Bank Arena is a 15,004-seat multi-purpose arena in Wichita, Kansas, United States. It is located on the northeast corner of Emporia and Waterman streets in downtown Wichita.

The arena features 22 suites, 2 party suites, and over 300 premium seats. It is home to the Wichita Thunder of the ECHL and previously to the Wichita Force of Champions Indoor Football. It is the second largest indoor arena in the state of Kansas, behind Allen Fieldhouse, which seats 16,300.

The Wichita State Shockers men's basketball team uses the arena as an alternate site for games that attract more fans than can be accommodated at its on-campus arena, Charles Koch Arena. The arena hosted first and second-round games for the NCAA Division I Women's Basketball Tournament in 2011 and the NCAA Division I Men's Basketball Tournament in 2018. The arena is also scheduled to host 1st and 2nd-round games of the men's tournament in 2025, as well as a regional for Sweet 16 and Elite 8 games in the 2022 women's tournament. The arena was scheduled to host the 2021 tournament, until the NCAA announced all games would be held at the state of Indiana due to the COVID-19 pandemic. On December 29, 2018, the UFC announced that Intrust Bank Arena would host the first ever UFC event held in Kansas.