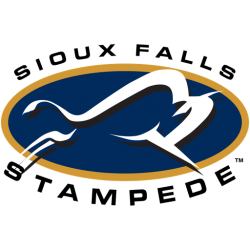 The Sioux Falls Stampede are a Tier I junior ice hockey team based in Sioux Falls, South Dakota. The Stampede are members of the Western Conference of the United States Hockey League (USHL). The team plays home games at the Denny Sanford Premier Center, the largest facility in capacity and size in the USHL. The team was established in 1999 and is owned by SD Sports and Entertainment, LLC. since 2012.

The Stampede have qualified for the Clark Cup playoffs in fifteen of twenty seasons. The team holds three Clark Cup championships, winning most recently in the 2018–19 season, two conference and one division championships, and was awarded the Anderson Cup in the 2005–06 season for the league's highest win percentage. The organization holds the USHL single-season attendance record at 200,597 fans over the 2015–16 season and are a five-time USHL organization of the year recipient. Thirty-two former players have skated in the National Hockey League (NHL).

The Denny Sanford Premier Center is an indoor arena in Sioux Falls, South Dakota. The building is located at 1201 North West Avenue, and is connected to the Sioux Falls Arena and Sioux Falls Convention Center. The Arena's naming rights partners, and largest sponsors, are Sanford Health, First Premier Bank and Premier Bankcard.

Completed in 2014, the arena has a seating capacity of approximately 12,000 spectators and replaces the DakotaDome and Rushmore Plaza Civic Center as the largest indoor venue in South Dakota. The Sioux Falls Arena hosts smaller concerts and events, while the Denny Sanford Premier Center hosts large scale concerts and sporting events.