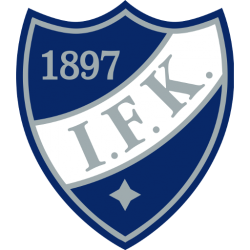 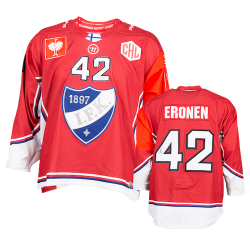 HIFK (a traditional abbreviation of Idrottsföreningen Kamraterna, Helsingfors, English: "Sporting Society Fellows, Helsinki") is a professional ice hockey team based in Helsinki, Finland that plays in the Liiga, the sport's top-level league in Finland. The team plays at Helsinki Ice Hall.
The club was founded in 1897 and started participating in ice hockey in 1929. Since then, HIFK has won the Finnish national championship seven times (1969, 1970, 1974, 1980, 1983, 1998, and 2011). HIFK has the highest number of audience in the Liiga and is one of the wealthiest sports clubs in Finland.
One of the major influences to HIFK was the NHL veteran and Stanley Cup winner Carl Brewer. Hired in 1968 as a playing coach, he advocated a North American style of play which has persisted in HIFK since. Brewer's influence on the way ice hockey is played in Finland led to his posthumous induction to the Finnish Hockey Hall of Fame in 2003. Helsinki Ice Hall (Finnish: Helsingin jäähalli, Swedish: Helsingfors ishall) is an indoor arena located in Helsinki, Finland. It has a seating capacity of 8,400.
It is the home arena for HIFK of the SM-liiga. It is sometimes called "Nordis" or "Petoluola", Finnish for "The beast cave", referring to the 2nd logo of HIFK: a red panther. Helsinki Ice Hall used to be the main arena for all important ice sports events, as well as indoor arena concerts, but after the construction of HK Areena and Hartwall Areena, many events take place in the newer arenas.
Nevertheless, the Helsinki Ice Hall still remains an active arena for concerts, conferences, expos and sports events. During the 2016 World Junior Ice Hockey Championships, games were played there.