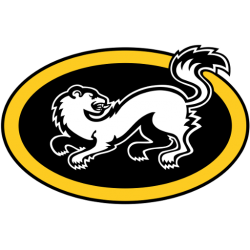 Oulun Kärpät (Finnish for "Oulu Ermines", sometimes referred to as Kärpät Oulu) is a Finnish professional ice hockey team based in Oulu and playing in the top-tier Finnish Liiga. Kärpät have won the Finnish championship title eight times, and has been the most successful Finnish ice hockey team in the 2000s and 2010s.
When the SM-liiga was founded in August 1975, Kärpät were still playing level below in the first division. The team earned promotion to the elite league after the 1976–77 season. In their debut season in SM-liiga, Kärpät managed to finish seventh out of ten teams. During their second season in the top level in 1978–79, however, the team struggled and finished last in the regular season, but proved victorious in the relegation league and retained their place in the top league. On the positive side, Kärpät's Kari Jalonen was awarded Jarmo Wasama memorial trophy for the best rookie in league after the season. Oulun Energia Areena, also called Oulun jäähalli and previously Raksilan jäähalli, is an ice sport arena in the Raksila Sports Centre, located in the Raksila district of Oulu, Finland. The venue is operated by the City of Oulu.
The arena is best known as an ice hockey venue and is home to the Liiga team Oulun Kärpät, in addition to the Oulun Kärpät teams in the U20 SM-sarja and U18 SM-sarja. Other tenants include the figure skating club Oulun Luistelukerho and the rink bandy team RB-Oulu. Energia Areena is the official home ice of the Oulun Kärpät 46 representative women's ice hockey team, Oulun Kärpät Naiset of the Naisten Liiga, however the team plays almost exclusively out of Raksila 2.