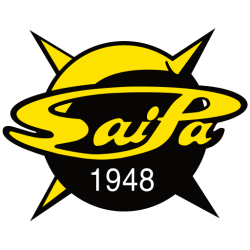 Saimaan Pallo (SaiPa) is an ice hockey team in the Finnish Liiga. They play their home games at Kisapuisto in Lappeenranta, Finland. SaiPa has many nicknames, such as "The Sputniks", "Sputnik", "miracle of the East" and "East giant."
SaiPa play home games in the yellow shirt, black pants, yellow socks, and a black helmet. SaiPa play away games in mostly the same costumes as the home games, but also have a black version of the jersey. Kisapuisto is an arena in Lappeenranta, Finland. It is primarily used for ice hockey, and is the home arena of SaiPa. It opened in 1972 and holds 4,820 people.
SaiPa has participated twice in the Champions Hockey League. During the 2014-2015 season, the team survived the quarterfinals, where they lost the return match against Oulun Kärpät. During the 2016-2017 season, SaiPa won their initial games by 11 points. Eisbären Berlin and Luleå HF were the runners-up.