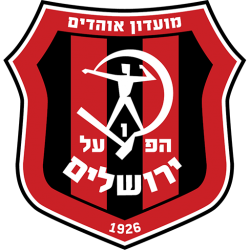 Hapoel Jerusalem Football Club (Hebrew: מועדון כדורגל הפועל ירושלים‎, Mo'adon Kadouregel Hapoel Yerushalayim) is an Israeli football club which existed from 1926 till 2019 and again since 2020 after Hapoel Katamon Jerusalem has been renamed. The club currently plays in Liga Leumit and is based at Teddy Stadium in Malha, Jerusalem. The Club has won the Cup title on 1973.

Hapoel Jerusalem Club was established in 1926 and played in the inaugural season of the EIFA league, playing the league's first match against local rivals Maccabi Hasmonean Jerusalem. The club played in the league for its first three seasons, however, the club was restricted to playing mainly in the Jerusalem area due to travelling difficulties. The club participated occasionally in the Palestine Cup, reaching the cup final in 1943, losing to a team from the Royal Artillery 1–7.

After the establishment of Israel, the club registered to play in the makeshift second tier league, Liga Meuhedet, in the Jerusalem-Central division, which the club won. The club continued to play in the second division (Liga Bet until 1956 and Liga Alef afterwards), until it was promoted to the top division at the end of the 1956–57 season, after finishing second in promotion play-offs. Following the promotion, the club stayed in the top division for 21 seasons, achieving its best position, 3rd, in 1972–73. In 1971–72 the club reached the State Cup final, losing to Hapoel Tel Aviv 0–1. A season later, the club reached the cup final again, this time winning the cup.

In the early 1990s, the club was transferred to businessmen Yossi Sassi and Victor Yona. The two ran the team together until falling out, leading to a long business and legal dispute which lasted until 2009, when Yona left the club. During the dispute, a group of supporters, tired of the feuding between the two businessmen, decided to establish a group, first in an attempt to purchase control of the club, and then in a bid to establish a fan-owned club, Hapoel Katamon Jerusalem. The fan-based club was established in 2009 (after a short period of existence as a merged club with Hapoel Mevaseret Zion) and progressed to the Liga Leumit in 2013–14, where the two clubs met for the first time.

The club played in the third tier Liga Aleph after being relegated from the second tier Liga Leumit in the 2016–17. On 26 August 2019 the Israeli Football Federation refused to list the club for 2019–20 season due to financial problems.

On August 9, 2020 the club has been officially recreated, as Hapoel Katamon renamed to Hapoel Jerusalem.

The stadium is named after long-time Jerusalem mayor Teddy Kollek, who was in office during the time of its construction and was one of its prominent advocates.