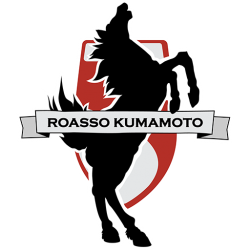 Roasso Kumamoto (ロアッソ熊本, Roasso Kumamoto) is a Japanese football club based in Kumamoto, the capital city of Kumamoto Prefecture. The club currently plays in the J3 League, which is the third tier of football in the country. Roasso is a portmanteau of the Italian words rosso and asso, meaning "red ace".

The club was founded as the Nippon Telegraph and Telephone Public Corporation (Den-Den Kōsha, current NTT) Kumamoto Soccer Club in 1969. The club was promoted to the Kyushu Soccer League in 1983.

According to the NTT's privatization in 1985, the club was renamed as NTT Kyushu Soccer Club in 1988. During the NTT Kyushu era, the club won five Kyushu Soccer League titles and one All Japan Senior Football Championship. The club changed their name again to NTT Kumamoto Football Club in 2000.

The club changed their name to NTT West Kumamoto Football Club in 2001 as the NTT was divided into NTT East and NTT West. The club was promoted to the JFL in 2001. The NTT relinquished the ownership of the club in 2002 and community-oriented Alouette Kumamoto Football Club was born. Alouette is a French word meaning skylark, the bird of Kumamoto Prefecture. The club finished at the 17th in this season and was relegated to the Kyushu Soccer League.

The club name changed again to Rosso Kumamoto in 2005. Rosso means red in Italian. After they won the Kyushu Soccer League and finished at the 3rd in the Regional League play-off tournament, the club was promoted to the JFL.

The club was recently featured in J.League programming to introduce the club to followers of the pro league. Rosso's second-place finish in the 2007 JFL season was high enough to earn promotion into the J.League (J2 League) for the 2008 season.

The club changed their name to current Roasso Kumamoto in 2008. The previous name Rosso was a registered trademark of another company and the club could not use it. With Rosso's promotion from the Japan Football League to the J. League Division 2 in 2007, KKWing is expected to play a role in Rosso's ascendancy.